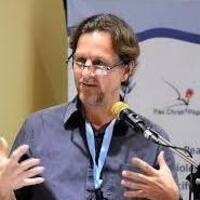 A Fierce Tenderness: Discipleship as Empathy

Through witness and word, in scripture and by attention to exemplary lives, we’ll explore what it means to practice a discipleship defined by “other-centeredness,” one rooted in gentleness, hospitality, nonviolence and love and characterized by self-awareness and a deep respect for human dignity.

Johnny Zokovitch is the Executive Director of Pax Christi USA, the national Catholic peace and justice movement. Previously, Johnny worked in Brussels with Pax Christi International as the Senior Communications Officer promoting the work of human rights and the promise of nonviolence in addressing conflict. For nearly 15 years, he lived at and co-directed the Gainesville (Fla.) Catholic Worker House, an intentional community serving and living with people who are homeless, addicted, impoverished, and mentally ill. He holds an M.A. in Theology with a concentration in biblical studies from the University of Notre Dame and has written for or been featured in National Catholic Reporter, US Catholic, Belief.Net, The Other Side, the Encyclopedia of Race and Racism, and elsewhere.

The Center for Faith & Justice